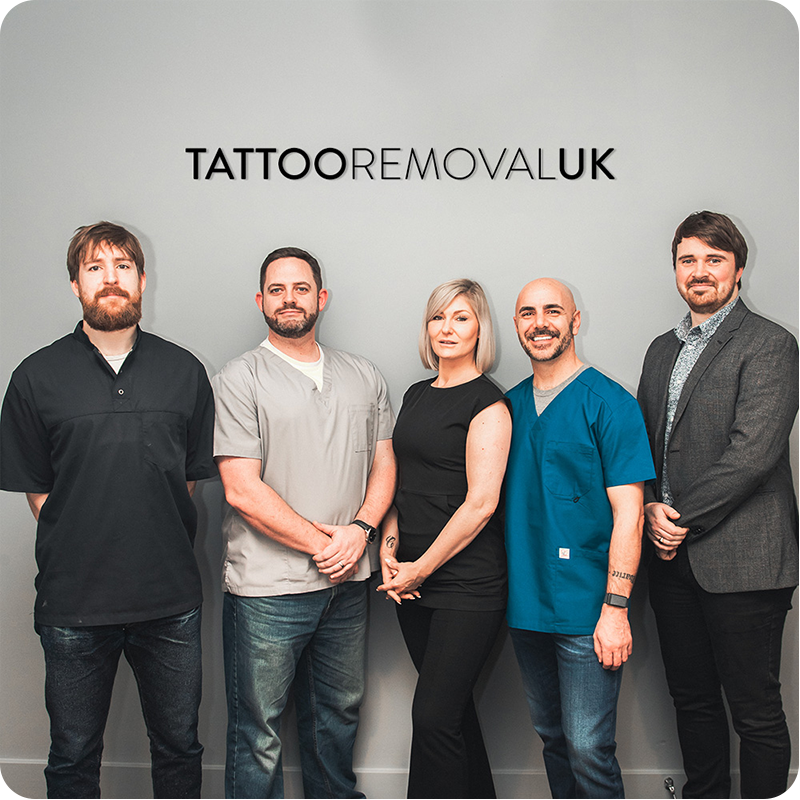 Tattoo Removal UK (previously known as Tattoo Removal Manchester) was created in 2013 out of the highly rated Flesh Tattoo studio which is based on Manchester’s Lloyd Street. The laser clinic’s newer location is just a short distance from the tattoo studio where it all started. The company’s interest in new laser tattoo removal technologies started because founder of Flesh Tattoo and Laser Removal UK, Jamie Alaise wanted to remove several of his awful tattoos. After recruiting some amazing tattoo artists and seeing the technically advanced designs they were creating, Jamie realised just how bad some of his old tattoos were.  Having tried a number of tattoo removal options, including some of the more ‘experimental’ ones, particularly in an aim to get rid of the deep, black cover-ups he hated, it became clear that there needed to be better transparency about laser tattoo removal methods and practices.

After investing in the first laser tattoo removal machine (a table-top ND YAG) Jamie started to learn more about laser removal alongside the studio’s resident piercer at the time, Nick.  Nick later became the second laser technician and even travelled the world visiting shows and exhibitions to find the best new machines and build relationships with laser technology innovators. These relationships have enabled us to get the best technology out there to remove tattoos in the safest and most efficient way. Every time the technology improves, we invest in better machines.

Our passion to be the best at removing unwanted tattoos, whilst delivering an informative and professional service, comes from knowing that for a number of people there are lots of negative feelings attached to their old and unwanted tattoos. Years of discussing problem tattoos with clients has really brought home the psychological impact that unwanted tattoos can create, and the fact that negative associations play a massive part in the decision to want a tattoo faded for a re-work or completely removed.  Tattoo Removal UK now carries out an average of over 350 appointments a month, and have just opened three additional clinics in Greater Manchester. We expect to be completing 1000 appointments a month by mid 2022 and want to help as many people as possible remove their unwanted tattoos as safely, quickly and comfortably as possible. 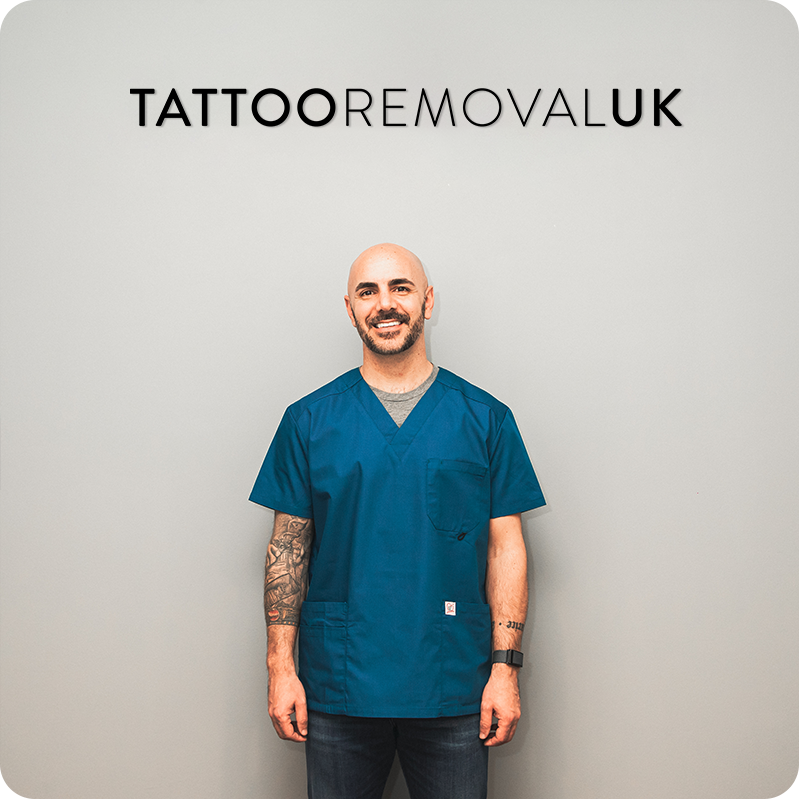 My background is primarily in business start-ups, though I now focus on being a full-time ‘geek’ about skin and laser technologies. Having been fully trained in laser processes by courses created in conjunction with The University of Manchester and Lynton Lasers, I’m still always keen to learn about advancements in the field. I’ve been lasering unwanted tattoos for eight years now, since the opening of Flesh Tattoo (where the first laser tattoo removal appointments were carried out) in 2013. Years of owning a tattoo studio while carrying out specific laser training means I have an all-round understanding of inks, laser technology and skin. I am covered in tattoos myself and love a variety of tattoo styles, but I hate awful tattoos and the impact that these can have on the people that carry them. Having a fair few awful tattoos of my own, I have been known to use laser removal on myself. My passion is to help as many people as possible to remove their unwanted tattoos. Listening to our clients’ stories about their negative attachments to their tattoos really motivates me to do the best job possible and utilise my years of experience to best serve them. 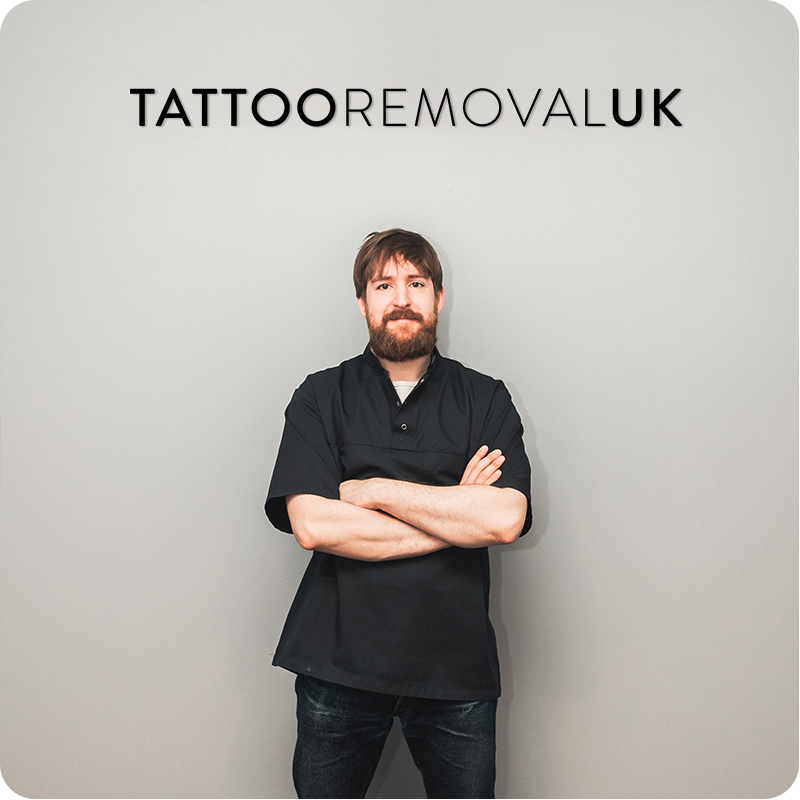 My lifelong interest in academia has seen me earn both a law degree and a Master’s degree in business administration. This academic background means I have a passion for research and intense levels of attention to detail. My years of studying have run alongside my coaching of Brazilian Jujitsu, a contact sport that has meant I’ve seen my fair share of good and bad tattoos on people. Academia and martial arts aside, I’ve long been involved in fashion and tailoring, working in a variety of bespoke menswear outlets and creating some exquisite suits. I think this varied combination of interests, and the fact I love to learn new things, is what has made me a hardcore researcher, a bit of a geek and someone who is awkwardly particular about details. This love to learn has meant that after working with Jamie for some years on various projects, I realised that we have a kindred interest in laser technology. Because of this it just seemed natural to join the laser business with Jamie and help to grow it. I have been removing tattoos for many years now and I am fascinated by progressions in laser technology. Years of engaging with laser related technological advancements have meant my interest now goes beyond laser tattoo removal and into other areas of laser correction and rejuvenation. My studies have helped me understand the nuances of the human anatomy, allowing me to utilise this knowledge when using the clinic’s wide range of machines. Most importantly, I love to help people, so removing tattoos that customers now hate is a great and fulfilling task to take on every day. 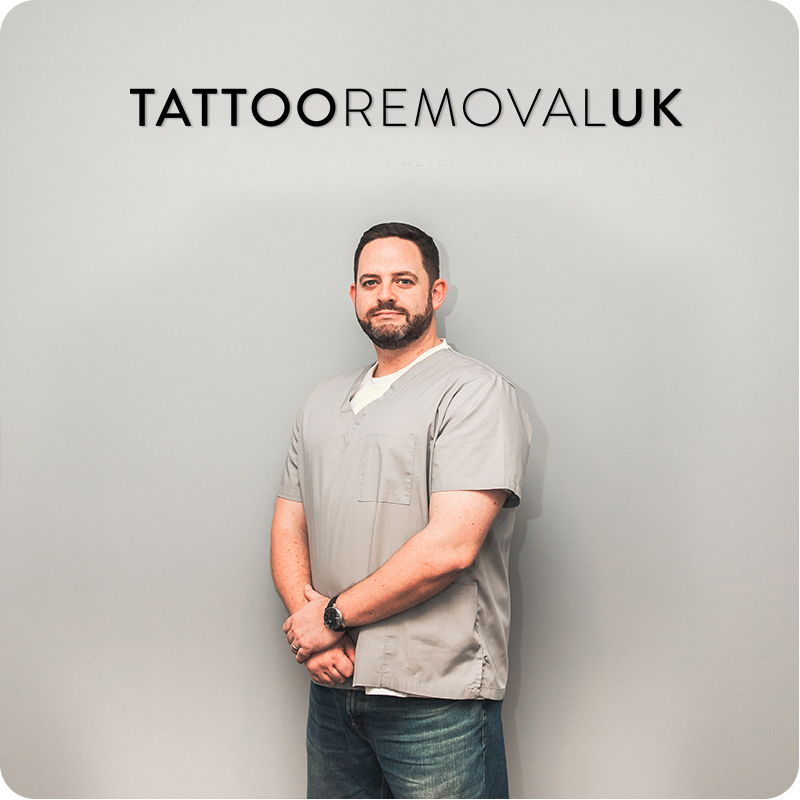 My background academically is in applied medical imaging, which includes X-rays, MRI and Ultrasound, and my areas of interest have always been related to anatomy and physiology. Some dry topics I know, but I’m a person who has longed worked with data, meaning the minutiae of things is fascinating to me. I am qualified to a high level in tattoo removal, hair removal, skin pigmentation correction, micro-needling and the application of HIFU. The courses I have undergone were written in conjunction with the University of Manchester, making them ideally suited to my beliefs in thorough understandings and scientific accuracy. I joined Tattoo Removal UK after knowing and working with Jamie for many years on other projects. He drafted me in to work with clients and support the training schedules for the business. Being close friends for many years, I believe that I was brought in so that Tattoo Removal UK could best utilise my extreme attention to detail and knowledge of physiology and the medical field. I endeavour to help people while making their experience both informative and stress free.

I have worked in client services and technology for most of my life, meeting and aiding a wide range of people. Tattoo removal is important to me because I have always been interested in the idea of helping people who are suffering from poor mental health. Every day I see how the presence of unwanted tattoos can significantly impact people’s mental states, so helping clients to fade or erase a tattoo that is causing them anxiety feels extremely rewarding. The beauty industry and facial aesthetics in general has been an area I’ve been obsessed with for over a decade. Learning about new technologies to figure out what processes and treatments will be best suited to each client’s specific needs means no two days are the same at the clinic. I’m motivated by learning about new aesthetic and laser innovations and the ways I can use these to perfectly address my clients’ requirements. After completing a variety of courses that were written in conjunction with the University of Manchester, I am qualified in tattoo removal, hair removal, skin pigmentation correction, micro-needling and the application of HIFU. By conducting thorough consultations to identify the ideal techniques and technologies that can be used for each individual I am able to use the expertise I’ve gathered over my years studying the beauty industry. Seeing my clients’ happy reactions to their treatments always feels great.